Adventures in the Algarve… 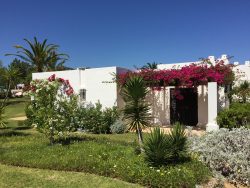 I’ve been radio-silent for the last ten days or so, on holiday with friends in the Algarve. We were staying by the sea, just outside of Albufeira. It’s a beautiful part of the world, although the tourists hotspots of Albufeira are like Little England, with Brits on parade, beer in hand and red lobster skin on display to the world, and it’s definitely ex-pat territory! I think I heard more English accents than I ever did Portuguese. 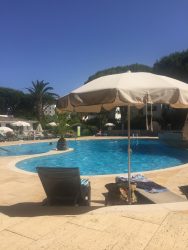 restaurant, bar, balcony, bed. Very lazy! We did go to the beach one day, although this early in the summer the sea was still quite cool. I tend to like the idea of the beach more than the reality anyway – I don’t especially like the saltwater and I hate the way the sand gets everywhere. So one day at the beach is enough to remind me that however beautiful it is I prefer the pool!

We did go to Lisbon for two days, since it’s a city none of us had ever visited before. It’s a lovely city to walk around, although you have to be prepared for lots of steps and steep windy streets and alleys. It would certainly keep you in good shape living there! 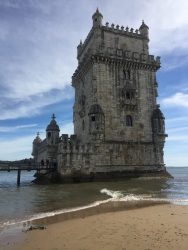 spend long – we visited Torre de Belém, an early 16th century fortified tower literally right on the water (photo left); the Jerónimos Monastery, which is huge and stunning, although because we were running late we didn’t have time to go inside; the Padrão dos 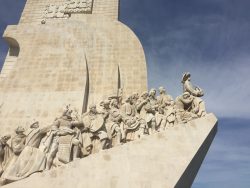 Descobrimentos (Monument of the Discoveries) (photo right), a huge monument celebrating the Portuguese Age of Discovery, depicting important figures of the time, with Henry the Navigator at its head.

We also visited the Castelo de São Jorge, a Moorish castle on a hilltop overlooking the city with the most amazing views across the Tagus river and the city below. I love Spanish and Portuguese medieval architecture, the Islamic influences blended with the European. One of these days I will get to the Alhambra, it’s always been one of the places I’d love to 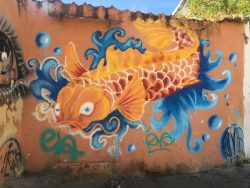 see. The castle is in the Alfama District, the oldest in Lisbon, and it has a wonderful quirky artistic vibe to it. The old trams run through there still, and there’s so much marvellous street 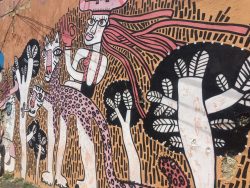 art on the walls. These were just two of my favourites.

I’d definitely like to go back to Lisbon for a longer visit – I feel like we only scratched the surface. I just love visiting cities in places like Spain, Portugal or Italy – so much of live takes place out in the streets, and it’s still buzzing so late at night with shops and cafes, where English streets at a similar hour would be deserted.

I’m avoiding the scales for the next three months, because I’ve done nothing but eat pastel de nata and drink cocktails and get little more exercise than a leisurely dip in the pool. But it was worth it!