At the going down of the sun… 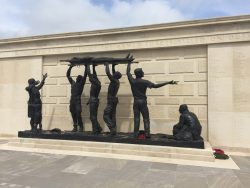 I visited the National Memorial Arboretum at the weekend, which, strange as it may sound, is one of my favourite places to go on a warm summer’s day.

I think most people think of it as a military memorial garden, and certainly it’s full of military memorials to regiments, battles, campaigns, units, but it’s actually open to any kind of memorial. So in many ways it’s as much a sculpture garden as it is a memorial site, because there is so much variety and creativity and vibrancy to the memorials. There’s no uniformity or restrictions in terms of the memorials, so you get some that a very formal and traditional – marble slabs and the like, and then you get some like this carousel horse for the Showman’s Guild! 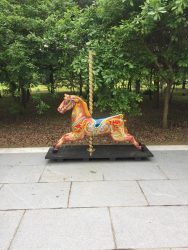 It’s spread over 150 acres, in beautiful countryside, and there’s no real order or layout to it – so you just wander randomly along paths and through wooded areas and along the river, just stumbling across memorials and statues and artwork. 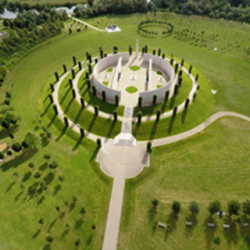 The centre of the arboretum is the Armed Forces Memorial, which is a circular memorial with two curved walls and two straight walls, open at either end, on top of a mound. One of the sculpture is along a wall, with a crack in the wall when a shaft of sunlight shines through at exactly 11am on the 11th November each year. Apparently there are 15,000 names on the wall, for every death in conflict since 1945. But the saddest part to me is the blank space left with room for another 15,000…

One of the most ‘popular’ memorials is the Shot at Dawn memorial. I 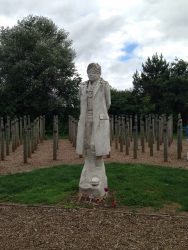 use the term ‘popular’ loosely – it’s the one most people make a point of visiting, but ‘popular’ seems like the wrong word. The wooden posts surrounding the statue all bear the names of one of the 307 of soldiers executed during WW1. The statue itself is modelled on a Private Herbert Burden, who lied about his age to enlist and was later shot for desertion when he was just 17. Looking at the posts surrounding the statue it was heartbreaking to see just how young so many of them were. 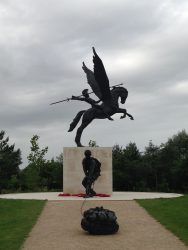 My personal favourite of all the memorials is the one to the Parachute and Airborne Forces. It’s Bellerophon mounted on Pegasus, above a paratrooper pulling up his chute. I just love the combination of modern warfare and Greek mythology, ancient and modern warriors.

I can spend hours just walking around, and I haven’t even mentioned the visitor centre, or the Millennium Chapel where they observe the Act of Remembrance every day, or the temporary exhibitions. This summer they have a display of beautiful War Poppy artwork by artist Jacqueline Hurley – I bought a print of this one.

It’s definitely a place worth a visit, if you’re in the area, or even to make a point to travel to specially.