Edward III and the Triumph of England – Richard Barber 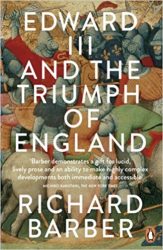 At one point in these pages Richard Barber refers to the work of another historian of the period as ‘masterful if somewhat indigestible’, and sadly I’d say that’s a pretty good description of this book too. It’s a book that can’t seem to decide what it wants to be – or perhaps it’s trying to be too many things. Is it a biography of Edward III? Sort of. Is it a history of the beginning of the Hundred Years War? In a way. Is it a history of the Order of the Garter? Closer to that than anything else. Is it an overview of the medieval concepts of knighthood and chivalry? That’s definitely in there.

Perhaps it’s a failing of the publisher and the marketing team. The title of the paperback is ‘Edward III and the Triumph of England’, which definitely suggests a history of Edward III and his military exploits in pursuit of the French throne, and the blurb on the back does nothing to dispel this impression. But that’s not what this book is about, or not in its entirety, and certainly not in such a straightforward style. If anything this book reminded me of a series of standalone essays on related concepts – there’s a chapter on the history of chivalric orders, a chapter on tournaments and festivals, a chapter on the royal chapels and the College of St George at Windsor, a chapter on the laws of war. You can see the common thread running through it, but it lacks a certain narrative cohesion that makes it a challenging and quite frustrating read.

It also presupposes a great deal of knowledge about the events of the fourteenth century, which perhaps can be excused – you would assume anyone picking up this book wouldn’t do so on a whim, would already have an interest in the period – but then it is a mass market paperback published by Penguin, so it’s hardly aimed at a niche academic readership. There are more than a few occasions where Barber passed over significant events with scarcely a sentence, presumably assuming that his reader would know precisely what he was referring to and therefore it didn’t bear repeating. Personally this is a period of history I’m interested in, and therefore, for example, I didn’t need an explanation of how Henry IV succeeded Richard II, but that’s not a given for everyone. I’d certainly heard of the battles of Crécy and Poitiers, but Nájera was unfamiliar to me, and again, the assumption in the text is that mentions to it need no elaboration.

But, in this book’s defence, it is masterful. Barber knows his period intimately and the depth and breadth of his research is impeccable. I would imagine as an exploration of the origins of the Order of the Garter this book would be hard to beat, as long as that was all the reader was interested in. But as a wider history of the period, encompassing the context and the personalities as well as the battles and the details, I found it, yes, indigestible.