Queen of the Conqueror: The Life of Matilda, Wife of William I – Tracy Borman 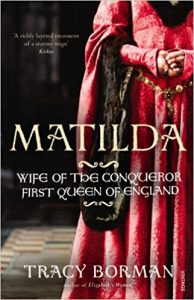 1066 is very much the BC:AD moment of English history; anything before to most people is a confusing muddle of Anglo-Saxons, Vikings and Romans. It is only with the bestriding figure of William the Conqueror that England as we know it comes into any kind of recognisable focus. And yet despite his invasion and conquest being the defining event of English history to this very day, William himself is a fairly shadowy figure in history.

So with that in mind, just imagine how much more of a shadowy figure is Matilda, William’s wife and queen. And yet in her day Matilda was certainly more of an established personality on the international stage than William – her bloodline and connections were more important, and she herself was far more of an exalted figure than the illegitimate son of a duke of Normandy with a shaky grasp on his own inheritance. Matilda even turned down William’s first proposal of marriage, deeming him beneath her dignity. The reasons why she changed her mind have been left to legend, but change her mind she did, forging a strong partnership with William that contributed in no small measure to his subsequent invasion and conquest of England. Without a regent whom he trusted unconditionally to hold his continental domain, it is unlikely William would have risked a length military expedition across the sea, and he certainly would not have been able to be absent from Normandy for the length of time it took to fully pacify England.

In many respects, reading this biography, Matilda reminded me of a later, much better known medieval queen – Eleanor of Aquitaine. Both were comfortable wielding the power of a queen; both substituted for their husbands in the absence in the position of regent; both were revered and respected figures; both rebelled against their husbands in favour of their sons. I think Matilda and Eleanor would have recognised much in one another.

As you can imagine, Matilda’s was a tumultuous, dramatic life, and she couldn’t ask for a better biographer than Tracy Borman. She has teased out the details of Matilda’s life from the shroud of centuries and brought her back to life again, a woman every bit the equal of her husband and who contributed no less to the Conquest of England. Borman presents both the myths of Matilda’s life and the facts, and whilst it is frustrating that there are so many aspects to her life that we can just never know for certain, Borman never pretends to knowledge that isn’t there. It does mean in many respects this is as much a book about William the Conqueror and the 11th century than it is Matilda, but that is inevitable with so much lost to history, and it doesn’t make any worse of a book.