Review: Be Free or Die: The Amazing Story of Robert Smalls’ Escape from Slavery to Union Hero – Cate Lineberry 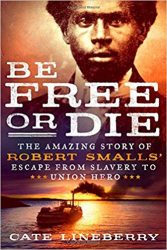 I’d come across references to Robert Smalls in quite a few books on the American Civil War in the past, so I was familiar with the bare outlines of his story and keen to learn more. When I came across this book I jumped at the chance to read it, since by and large historians of the period have been content to focus on the bigger picture and more famous names, and passing references to Smalls are often all one can find.

And what a remarkable story it is – born into slavery, he freed himself, his wife and children and a number of other slaves by stealing a steamship and sailing it right out of Charleston Harbour under the gaze of sentries and the batteries on Forts Sumter and Moultrie, before delivering it straight to the Union ships blockading the harbour. He and the other slaves were awarded the prize money from the sale of the ship, and Smalls joined the Navy, becoming pilot and later captain of that self-same ship. The prize money gave him a start in life and he prospered during the war, ending up buying the very house in which he and his mother had been enslaved and later even giving shelter to the mother of the man who had owned him! He became a politician and served as one of the very first African-American congressmen, for South Carolina.

So it’s a hell of a tale, and it’s well told in this book, for the most part. But it left me wanting more, as it only deals with Smalls’ life during the four years of the Civil War. The years before Smalls’ remarkable escape and the years after the Civil War are dealt with in little more than a chapter, and in order to fill a book there is a certain amount of repetition and needless ‘padding’. I appreciate that the title of the book pretty much spells this out: the ‘escape from slavery to Union hero’ but I hadn’t expected that to be literally all this book is concerned with. It seems such a wasted opportunity, when his exploits during the war were only a part of what made Smalls such a remarkable man.

I believe this is currently the only book dedicated to Smalls still in print, other than a few children’s books, and that’s a travesty and a shame – and only exacerbates my disappointment in this book, which I otherwise thoroughly enjoyed. A man like this deserves a full-length biography, deserves a host of them. Historians, take note!

← “Without hope, without witness, without reward..”
Review: Long Live the King: The Mysterious Fate of Edward II – Kathryn Warner →