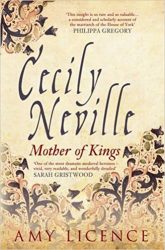 Royal women led lives at the very epicentre of the events that make up the history of this country, but all too often their stories are neglected. Partly, it’s true, due to a lack of the records and documentary evidence that form the backbone of history, but partly because their lives are deemed less interesting, less influential, and therefore not of relevance when telling the story of the great events that shaped the history of England. And yet a women like Cecily Neville, mother of kings, a potential Queen of England herself, a figure at the very heart of the Wars of the Roses, connected by marriage or blood to almost all the major players – what a fascinating insight she could give us!

Cecily’s life spanned some of the most tumultuous and significant decades in England history – born during the reign of Henry V, mere months before Agincourt, she was a granddaughter of John of Gaunt, great-granddaughter of Edward III, wife of Richard Duke of York, mother of Edward IV and Richard III, grandmother of the Princes in the Tower and Elizabeth of York, great-grandmother of Henry VIII. Her husband claimed the throne himself, and Cecily was within inches of becoming Queen of England before the Wheel of Fortune turned and Richard lost his life (and his head) at Wakefield Bridge, only to see her eldest son Edward IV triumph and become King. It’s hard to think of another figure so utterly interwoven through these events, who saw them all and survived to tell the tale.

So Cecily is a figure ripe for biography, and Amy Licence does a decent job – as well as anyone can with such a dearth of resources. We can never know what Cecily truly felt or thought, how she really reacted to events that tore her family apart, how much influence she had on her sons, how much of a hand she herself had in Edward IV’s winning of the throne from Henry VI, Richard III’s usurpation of the throne. What did she think about the death of Henry VI, or George Duke of Clarence, or the Princes in the Tower? How did she feel seeing her granddaughter Elizabeth of York wed to the man who had invaded the kingdom and killed her son Richard III? We can never know, and to her credit Amy Licence does not overly speculate, in these areas at least. But, as with all historical biography to a greater or lesser extent, there is a large amount of speculation and supposition in this book – particularly as it relates to Cecily’s belief in her family’s royal destiny and her role in Richard’s usurpation.

Licence also spends the majority of this book detailing Cecily’s early life as wife and mother during the Wars of the Roses – understandably so – but the later years, particularly those during the reigns of Richard III and Henry VII are somewhat skated over. Richard III’s reign is dealt with in one chapter, Bosworth barely lasts a chapter. And there is scarcely anything regarding what to me may be the most interesting chapter of Cecily’s life – how she lived under the reign of Henry VII, having outlived her husband and all of her sons, their plans of a Yorkist dynasty come to ruin, and a man with a far lesser claim to the throne as King of England in their place. But alas, we shall never know…

← At the going down of the sun…
Review: Wonder Woman →