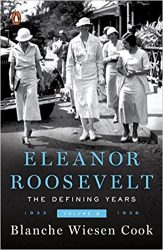 Eleanor Roosevelt had always been a champion of the downtrodden and oppressed, had always been a voice for the voiceless, a champion of freedom and liberalism – but FDR’s election to the Presidency, and the desperate poverty and hardship of the Depression, gave her a position and an authority to really make a difference, and she took full advantage of it. As a result of FDR’s disability, Eleanor was his eyes and ears across the country, and she took that initial role and made it something entirely her own.

She disagreed with her husband on many occasions, publicly and vehemently at times, and scarcely ever felt constrained by his position or politics to self-censor herself. One notable exception was in international affairs, and Eleanor was noticeably silent on the issue of Germany’s treatment of the Jews. Yet she had other ways of making her feelings known, and she was incredibly active on behalf of organisations championing tolerance – whether that was combating anti-Semitism, racism, sexism, anti-communism. At times this drew an immense amount of conservative criticism, yet by the close of 1938 Eleanor was outpolling FDR in terms of approval ratings.

These years were also defined by Eleanor’s intensely close relationship with Lorena Hickok, a newspaper reporter, who became one of ER’s closest friends, perhaps more. Certainly their letters display an intense love, tenderness and passion for one another, but as with so many aspects of ER’s internal emotional life much is still left a mystery. But Wiesen Cook handles the potentially controversial issue with great respect and delicacy, and it only serves to illustrate just what a complex, fascinating personality Eleanor Roosevelt was. Roll on the final volume!

← Review: The Stations of the Sun: A History of the Ritual Year in Britain – Ronald Hutton
Review: Eleanor Roosevelt: The War Years and After, 1939-1962 – Blanche Wiesen Cook →