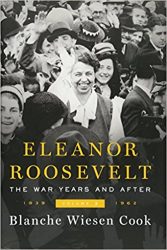 This final volume of Blanche Wiesen Cook’s three-part biography of Eleanor Roosevelt disappointed me. Not so much for the writing or research or approach, all of which are just as good in this book as the previous two, but purely for reasons of content.

For all intents and purposes, Cook finishes up with FDR’s death in 1945 – the remaining 17 years of Eleanor’s life are dealt with in a single relatively short epilogue chapter. Yet arguably some of Eleanor’s most important work was done in these years, such as her work with the UN, human rights and civil rights, and these were the first years of her life when she stood independent and free to act as she chose, not bound by family ties or political expediency. And bear in mind that the entirety of the rest of the book covers just six years otherwise, from 1939 to 1945. So why skate over 17 years of Eleanor’s life in one chapter?

How did Eleanor mourn and move on after FDR’s death? You won’t find that here. How did she cope with moving out of the White House? What did she do with the apartment she had bought for FDR’s retirement? No idea. Cook mentions that in her later years Eleanor was devoted to Dr David Gurewitsch, but who he was and how they met remains a mystery in this book. The death of Eleanor’s lifelong secretary and companion Tommy is dealt with in a single sentence. Who was with Eleanor when she died? What did she die of? What was the funeral like? What was the reaction to her death? Nothing. There’s enough material here for an entire other volume, but it’s as though Cook got bored of her subject mid-way through this book and just couldn’t be bothered anymore.

When a woman’s biography effectively finishes with the death of her husband, even when she lived close to another two decades after him, it’s hard to escape the implication that her only significance came through that husband, rather than her own merits. This seems like a betrayal, almost, of everything Eleanor Roosevelt stood for. Eleanor Roosevelt was standing up for causes, fighting for social justice, for the poor and the oppressed, long before FDR became President. She was so much more than just FDR’s wife, America’s First Lady. She was important in her own right, earned the respect, authority and affection bestowed on her by her own actions, not’s FDR’s. This is supposedly a biography of her life, not her marriage, so to effectively stop writing in 1945 and just ‘sum up’ everything that came after is immensely disappointing.