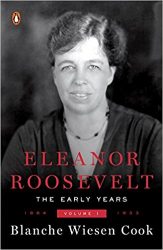 It’s a rare individual for whom I could stand to read a three-volume biography but I think Eleanor Roosevelt deserves one. Her life was so full, so involved and dynamic and controversial than any less would simply not be doing her justice. In many ways Eleanor’s life can very easily be divided into three parts this biography takes – her early life and developing political awareness, her years as wife of one of America’s most prominent politics and subsequently President, and the years after FDR’s death, as the grand dame of American politics.

She is still the most controversial and talked-about of First Ladies, loved and loathed in equal measure, who in many regards set the tone for all the First Ladies who came after her. Before her First Ladies were ornaments, hostesses, who rarely involved themselves in politics. But afterwards, a political role was expected for the First Lady – indeed, it is no doubt because of Eleanor Roosevelt blazing the trail that First Ladies now have their own offices and chiefs of staff and are expected to get involved in women’s issues. Well, apart from Melania Trump, but let’s not go there…

However, this book deals with Eleanor’s life up to FDR’s election as President, some 40+ years. They were not easy years for Eleanor, but with the benefit of hindsight it is clear that the trials and tribulations were necessary in order to shape the woman she became as First Lady. It is hard to see how else a woman born into such privilege and wealth could have emerged as the great feminist and radical champion of the poor and downtrodden during the Depression years.

I’ve really got no complaints or criticisms for this book, and in many ways it’s difficult to review each volume in isolation, because each forms part of the whole. My one tiny nitpick is the author’s decision to refer to Eleanor both as Eleanor and ER – it’s hard to really see the logic of this. It’s not as though there were multiple other Eleanors in her life that might cause confusion, and Cook uses both terms in the same paragraph and even sentence. It doesn’t detract from the hugely enjoyable read, but it’s a curious choice and one I couldn’t help but find jarring at times.

← Review: Long Live the King: The Mysterious Fate of Edward II – Kathryn Warner
Alert, alert – there is a vagina in the TARDIS… →