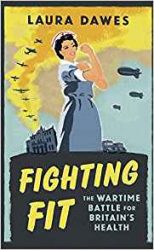 I dithered over my review for this book, because on the one hand I did really enjoy it, but there were a few things that I felt hindered giving it a higher rating. For example, every so often a bit of Australian slang creeps in, which really should have been dealt by the editor – anyone else know that ‘stoosh’ means ‘fight’, for example? It also wasn’t as comprehensive as I would have liked, either – being very much a mainstream, history-lite overview of Britain’s health during WW2.

It takes a thematic approach, each chapter being devoted to a different aspect – blood banks; rationing; finding alternative home-produced sources for previously imported medical products; combating communicative diseases in circumstances where people were so heavily packed together, such as air raid shelters; how Britain’s mental health would hold up to the prolonged tensions of war; how all levels of society, from Scouts to the WI, were involved in scouring the countryside to supplement medical and food supplies. But it’s all very interesting, and in many ways my complaint about its lack of comprehensiveness is evidence that I wanted more of a good thing!

However, it does neglect some aspects of the health situation that perhaps wouldn’t have painted such a rosy picture – it’s all very well talking about how well rationing worked in ensuring a healthy populace, but one shouldn’t neglect the role the Empire played in making up the home-grown shortfall or how placing the British fighting forces and home front at the forefront of the food queue exported shortages elsewhere in the Empire. 3 million people died of starvation in Bengal whilst the British population experienced at worst a lack of choice, but never severe hardship and were never even close to starving.

So in many regards, this book is better than my review reflects, but with the issues mentioned I felt I couldn’t rate it any higher.