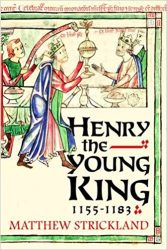 I would imagine that most people don’t have a clue that the numbering of our Henrys is technically out by one – that there was a missing Henry III, crowned, anointed and yet somehow forgotten, and all the subsequent ones should go up a digit. Henry IX just doesn’t sound right, does it? And yet, ’tis true.

The Young King, son of Henry II, was crowned king in his father’s lifetime – the only occasion in English history, although it was a relatively common practice on the continent – and should therefore be remembered in the regnal history of England as Henry III. But because he died young before his father, who was succeeded by the Young King’s infinitely more famous brother Richard, known as the Lionheart, and because of the circumstances of his death (in rebellion against his father, no less) he has somehow slipped from the remembrance of history and is not included in any lists of the kings and queens of England that you’ll find in textbooks and on classrooms walls.

Matthew Strickland has done superlative work restoring the Young King to history – it’s hard to think of a more authoritative and well-researched biography of a figure so hitherto neglected. What little remains of the Young King in chronicles and documents tends to be relatively hostile – dying young in the midst of a rebellion against his father, and not the first either, will do that for a reputation, with no opportunity for years and decades of wiser, more responsible behaviour to correct the youthful mistakes.

And yet, as Strickland ably documents, the Young King was not entirely at fault – what is a king without a kingdom to do, after all? Henry II’s greatest mistake was anointing his son with a crown but no authority, whilst his younger brothers may have lacked the crown but had lands and titles in which to base themselves and reward their followers. This fostered resentment among the brothers and frustration and aggression in an anointed king with no means to grow into the role he was expected to one day fulfil.

In Strickland’s biography, the Young King comes across a far more appealing figure than his brother Richard or indeed his father Henry II – charming, amiable, open-handed, less aggressive and argumentative. It is one of the great what-ifs of history – what if the Young King had succeeded his father? He was already married, and his wife had borne one child, who died shortly after death, but would no doubt have born others. Would Richard the Lionheart still have become king? And at his untimely death, John? Without John, perhaps no Magna Carta? Alas, we shall never know, but that is no reason to forget what might have been so entirely as we have.