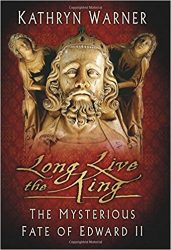 I’ve long been intrigued by the theory that Edward II did not die in Berkeley Castle, that he lived on in secret and may well have ended his days in Italy as a hermit. It’s one of the ultimate what-ifs of English history. Ian Mortimer is the most prominent advocate of this theory and has mentioned it in several of his books, but when I came across this title, an entire book devoted to exploring the evidence, I was very keen to read it.

Sadly, it was a tremendously disappointing read. I have read Kathryn Warner’s previous biography of Edward II, The Unconventional King, and thoroughly enjoyed it, so I don’t know what went wrong here. I found this book a slog from start to finish, poorly written and edited, repetitive, threadbare in places and overwhelming with unnecessary detail in others. At times I was almost despairing when faced with yet another paragraph full of ‘Edward may have crossed paths with A, who was sister of B, who was the daughter of C, niece of D, whose first husband’s sister’s brother’s grand-nephew was King of Aragon’ and so on. Thinking I’m exaggerating? Chew your way through this paragraph, as an example.

“Luca’s brothers Federico and Carlo and his nephews were also acknowledged as Edward I and II’s kinsmen, but his father Niccolo, Count of Lavanga, and uncles (who included Ottobuono Fieschi, elected Pope Adrian V shortly before his death in 1276) were not. The family connection tro the English royal family therefore must have come from Luca’s mother, whose name was Leonora or Lionetta but whose family background is uncertain. Manuele Fieschi, a cousin of Luca but not descended from Luca’s mother, was thus not related to the English royal house; neither was he Luca’s nephew, as some English historians have claimed. Luca Fieschi also claimed kinship to Jaime II, King of Aragon in Spain (born 1279, reigned 1291 to 1327), and the only family relationship which would connect him to both Edward II and Jaime II came via the houses of Savoy and Geneva. Edward I’s mother Eleanor of Provence, Queen of England and wife of Henry III, was the daughter of Raymond-Berenger V, Count of Provence, and her mother was Beatrice of Savoy, daughter of Thomas, Count of Savoy (Edward II’s great-great-grandfather) and grand-daughter of William, Count of Geneva. Ian Mortimer has suggested that Luca Fieschi’s mother Leonora/Lionetta was a daughter of the Italian nobleman Giacomo del Carretto, marquis of Savona, Noli and Finale (d. 168), who was a grandson of William, Count of Geneva and the first cousin of Edward II’s great-grandmother Beatrice of Savoy, and was also related to Jaime II of Aragon (another descendent of William, Count of Geneva.) Giacomo del Carretto’s daughter Brumisan addressed Edward I as her kinsman in 1278. Del Carretto’s second wife Caterina da Marano (c. 1216/18-72) was one of the many illegitimate children of the Holy Roman Emperor Frederick II (1194-1250), and was the full sister of Enzo, King of Sardinia and a half-sister of Konrad, King of Germany and Manfredi, King of Sicily. It is possible, though still only speculative, that Giacomo del Carretto and Caterina da Marano had another daughter, Leonora or Lionetta, who married Niccolo Fieschi and was the mother of Cardinal Luca Fieschi. If Luca was indeed to the grandson of Giacomo and Caterina, he would have the third cousin of Edward I ( they would both be great-great-grandsons of William, Count of Geneva) and the third cousin once removed to Edward II. Luca’s Malaspina nephews Manfredi, Bernabo and Niccolo, who may have been in charge of Edward II in Italy on the cardinal’s behalf, would have the former king’s fourth cousins. The family link would make Luca a second cousin of Jaime II of Aragon, who was a grandson of Manfredi, King of Sicily and great-grandson of Emperor Frederick II, and also his third cousin once removed via comment descent from William, Count of Geneva. There was certainly a blood connection between Luca Fieschi and his brothers and nephews, and Edward I and II; although one of Edward I’s great-uncles from Savoy married a Fieschi woman, a mere marital connection would not be enough for the Kings of England to address several of the Fieschi men as their relatives. Neither Edward I nor his father Henry III ever addressed any of the Fieschis before Luca and his generation as their kinsmen.”

Lost the will to live yet?

The evidence itself is compelling, what little of it there is. A letter in a French archive from a very well-connected Italian to Edward III, that may or may not have been sent. A reference in a letter from the Archbishop of York that states Edward II is alive well after the date of his supposed death. And the execution of Edward II’s half-brother, the Earl of Kent, for rebelling against Mortimer and Isabella on behalf of his supposedly-still-living brother. It’s thin evidence, to be certain, but so much evidence from the fourteenth-century is – the evidence of Edward II’s death in 1327 that historians have relied on for centuries is equally as tenuous.

So did this book convince me? No. I’m still open to the possibility – there is no such thing as historical fact, after all, merely a long-standing, plausible and largely accepted argument; and the evidence that argues for Edward II’s survival relies on just as many suppositions and assumptions as the evidence for his death. The Fieschi letter is certainly curious and requires explanation, if one proceeds from the position that Edward II did die in 1327, as does Thomas Berkeley’s statement to Parliament that he did not know Edward was dead until 1330, when supposedly he died in Berkeley’s own castle. And just because something seems extraordinary or implausible doesn’t negate its truth – history is chock full of extraordinary and implausible occurrences. If DNA evidence or some other irrefutable document appeared proving Edward II died years after his supposed murder in 1327, I’d be delighted, largely because of its implausibility! But on the basis of this book, I am still waiting for an historian who can spin me a convincing enough tale…