Review: Pale Rider: The Spanish Flu of 1918 and How it Changed the World – Laura Spinney 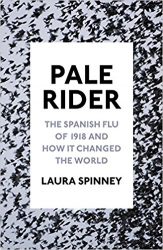 The First World War looms large in our collective cultural memory, arguable even larger than the Second World War, though more people died in that conflict. This has been ascribed to a multitude of factors – the pointless, the waste, the static pace, the fact that the ‘War to End All Wars’ only served to give rise to another, the disappointed promises, the harsh peace. But regardless of the reasons, WW1, and its ‘Lost Generation’, stands as one of the colossal tragedies of the twentieth century, remembered every year, mourned, vowed to never be forgotten.

What is curious, however, is that there was another colossal tragedy, another episode of futility and helplessness and waste, that killed many more people, ten times as many, and did more to decimate the young and fit and contribute to the ‘Lost Generation’ than the War did. And yet this event has been forgotten, or at least ascribed to the footnotes of history. Every schoolchild learns about the Great War; many schoolchildren learn about the Black Death. But many people know nothing at all about the Spanish Flu outbreak of 1918, that infected one in five people around the globe and killed somewhere between 50 and 100 million people, some 3-5% of the world’s population. One would think that such a cataclysm, an event that may well have been the biggest disaster in human history, would embed itself in the world’s memory just as deeply and painfully as a war, and yet…not.

In this engrossing and thoroughly interesting book Laura Spinney traces the course of the influenza epidemic across the globe, rather than focusing on any particular country. She explores the origins of its name, Spanish Flu; debates the three competing theories on where it originated; explains the epidemiology of the influenza virus itself and how it evolves and adapts; details that attempts by science and medicine to understand and treat the virus; and explores the accounts of those who experienced it firsthand, many painful and heartrending to read, of entire families, entire communities wiped out.

It is curious that an event that shaped the world as much as, perhaps arguably more, than the First World War, has been so neglected by history. I remember looking for a book on the Spanish Flu a few years ago, before this was published, and being surprised at how few titles were on the market. This is a welcome addition to a thin field, and serves as a fine overview to get anyone started. I’m on the hunt for more books on this topic now – so authors, get writing!