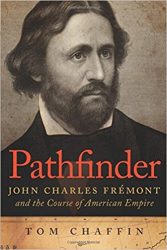 I picked up this book hoping for a biography of John Charles Frémont, a man whose exploits and explorations I’d come across numerous times in other biographies, other history books. An explorer, a presidential candidate, a Civil War general – a fascinating figure for a biographer! What I got was a book very much more about Frémont’s expeditions than it really was about the man himself – which wasn’t entirely disappointing, don’t get me wrong, because what is here is an excellent read. It just left me feeling the book was incomplete.

A good two thirds of this book is devoted to Frémont’s four expeditions into the American West, the explorations that made him famous and earned him the nickname ‘Pathfinder’. The moniker isn’t entirely accurate: Frémont very rarely ventured into completely unexplored territory and usually relied on guides or trails already established. He was, however, the first to map and survey these regions, and it does not diminish or obscure the very real hardships and dangers of these expeditions. Tom Chaffin devotes a great amount of detail to recounting Frémont’s journeys, and herein lies one of my major criticisms – I only wish he had devoted this amount of time to the rest of Frémont’s life.

Frémont’s candidacy for president in 1856, the first Republican candidate, is dealt with in one chapter. Frémont’s experience as a Civil War general is also dealt with in one chapter. In fact, Frémont’s entire life after 1854, some 36 years, is covered in little more than 80 pages. I appreciate that some episodes in a person’s life are more eventful than others, and biographers will inevitably dwell more of these – but as a reader I wanted to learn about Frémont the man, about his entire life, and so to skip over almost half his life in just a few short chapters leaves me disappointed. As I said, this is a book more about Frémont’s expeditions than him – and in that regard, it’s a fine book, well-researched, well-written, engaging. But I wanted more.

← Review: Pale Rider: The Spanish Flu of 1918 and How it Changed the World – Laura Spinney
Review: Fighting Fit: The Wartime Battle for Britain’s Health – Laura Dawes →