Review: ‘So High a Blood: The Story of Margaret Douglas, the Tudor That Time Forgot’ – Morgan Ring 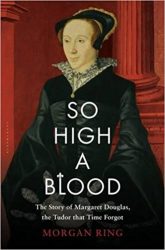 Margaret Douglas is buried in Henry VII’s Lady Chapel in Westminster Abbey, close to the tomb of her great-grandmother Margaret Beaufort, with whom she has much in common. History remembers both, if they are remembered at all, as dominant, forceful women, scheming and plotting to see their children crowned. How true a portrait that is can only ever be a matter of conjecture – but Margaret Beautfort’s son became Henry VII, and Margaret Douglas’s son Lord Darnley became, however briefly, King of Scotland, father to her grandson James VI/I, King of Scotland and England.

Like many Tudor women, Margaret’s life was shaped by her royal blood and closeness to the throne, yet she is often forgotten as a potential heir of Henry VIII. Her mother was Henry’s elder sister, Margaret, wed first to the King of Scotland James IV – their son James V was Margaret’s half-brother – and later to the Earl of Angus, Margaret’s father. In most histories of the period Margaret’s story therefore is told only tangentially through her relationships to the more famous players of Tudor history – granddaughter of Henry VII, niece to Henry VIII, cousin to Mary I and Elizabeth, half-sister of James V, aunt to Mary Queen of Scots, mother to Lord Darnley, grandmother to James VI/I. So it is refreshing to read a biography of Margaret where she takes centre stage, the dramatic and turbulent events of her life recounted to full effect.

And a dramatic life it was, and well told by Morgan Ring. Cast into the Tower of London no less than three times, a staunch Catholic during the Reformation, a friend to Mary I and a potential rival to Elizabeth, a woman who could call upon both French and Spanish monarchs for support, who succeeded in seeing her son married to the Queen of Scots only to see him murdered in mysterious circumstances, who outlived all of her children, and after her death found her plans for her bloodline succeed beyond her dreams, when her grandson James VI was crowned James I of England.

This is a book worthy of its subject, which is all one can wish for in an historical biography. Margaret was a woman who shaped the events around her, and Ring brings both those events and Margaret to vivid life in these pages. She succeeds in taking an historical period many of us are very familiar with and gives it a new form and perspective, seeing the reigns of Henry VIII, Edward V, Mary I and Elizabeth through Margaret’s eyes. I’d say for anyone interested in Tudor history, this is a must read.