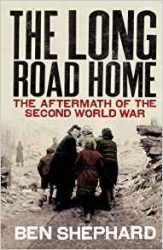 Read any history of World War 2 and it’ll probably finish up in the summer of 1945, maybe with VE Day, perhaps with Hiroshima and Nagasaki. There might be an epilogue chapter, a wrapping up that encompasses Nuremberg, the Marshall Plan, the Iron Curtain and the Cold War. But what is rarely addressed is what this book is entirely concerned with – the sheer staggering scale of the numbers of dislocated and dispossessed people, the refugees, the homeless and the stateless, some innocent, some not, some Jewish but most not.

Determined not to repeat the mistakes of the First World War, when disease and famine had stalked a devastated Europe and in many ways contributed to the chaos and disruption that gave rise to Hitler, the Allied powers tried to cooperate in strategies to stabilise conditions and repatriate the many millions living in camps across Europe. A civilian agency was created, UNRRA (United Nations Relief and Rehabilitation Agency), to take over responsibility for the DPs (displaced persons) from the military and bring some humanity and compassion to the treatment of these shocked and traumatised masses.

But what to do with them was a logistical challenge for the Allies every bit as daunting as the war itself. Saving only America, most of the Allied powers had difficulty feeding their own populations, let alone the DPs and the starving Germans; indeed, it was in this period that for the first time bread began to be rationed in Britain. Many of the DPs were ethnic Germans expelled from newly-Soviet Poland and Czechoslovakia; many others were citizens of those latter countries who refused to return to homelands under the communist boot. The vast majority of the Jews wanted only to emigrate to Palestine, and this the British government would not permit. Many others wished to emigrate to an America that did not want any immigrants at all. Other countries would take only DPs who could work, stepping in to industries desperate for labour in the push to get economies moving again – and yet few DPs were in a physical condition to labour in fields, mines or forests.

It was a logistical, administrative nightmare, and it largely on the logistics and administration that Ben Shephard focuses. Whilst there are voices of the DPs themselves in these pages, it is very much more a tale told from the perspective of the helpers, not the helped. There was never enough money, never enough personnel, or trucks, or blankets, or shoes, or food, never ever enough food for people who have starved near enough to death. And UNRRA was subject to the inherent poor organisation, petty bureaucracies, infighting, racketeering and corruption that plagues any altruistically-minded body set up in a hurry and staffed by well-meaning but inexperienced volunteers.

UNRRA did its best, but it could have done more, had it been properly staffed, funded and organised. But alas, altruism on the scale we are talking here is very rarely without an element of self-interest on the part of the governments funding it, and even the very best of humanistic endeavours can be overturned in a heartbeat by politicians concerned first and foremost with their own constituencies and parochial concerns. American senators and congressmen were particularly guilty of this, until they began to see an anti-communist benefit to it.

This is an excellent book, a real eye-opener, that ably fills in the gaps between the end of WW2 and the opening of the Cold War. It’s also gives a fascinating insight into the role that the camps and the DPs played in the creation of the state of Israel, and also the creation of the concept of ‘the Holocaust’, which as Shephard points out, was not considered by contemporaries and those who survived it, as we ourselves see it now. One definitely worth a read for anyone interested in what comes after the cataclysm of war…