Review: The Revolution of Robert Kennedy: From Power to Protest After JFK – John R. Bohrer 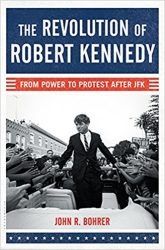 Any biography of Bobby Kennedy is very much a study in contrasts, a Tale of Two Bobbys, one might say. There is the early Bobby, McCarthy’s attack dog, his brother’s hatchet man, hard-edged and ruthless, not a man to be crossed. And there is the later Bobby – the liberal poster child, the man who embodied the hopes and dreams of a generation, the man who reached out to the poor and neglected groups on the margins of the American Dream.

So how to account for these two Bobbys? How to account for this revolution in personality and politics? For John Bohrer, the key to Bobby’s transformation lies in the shattering, shocking murder of his brother Jack. Bobby became the symbol of the Kennedy legacy, the keeper of the flame, the heir to the New Frontier, automatically placed in unwilling opposition to the man who actually succeeded JFK in the White House, LBJ. Exiled from the centres of influence and power he had so long been used to occupying, Bobby struggled to find a new position for himself, a new identity and focus for the life that had so long been at the service of his brother.

In many ways Bobby’s turn towards public service, striving to make a difference on a small scale, the ‘tiny ripples of hope’, where he had been so used before to strategy and political manoeuvring on a national scale, shouldn’t have come as a surprise. As JFK himself said years before, “Just as I went into politics because Joe died, if anything happened to me tomorrow, my brother Bobby would run for my seat in the Senate. And if Bobby died, Teddy would take over for him.” JFK probably didn’t anticipate dying as early as he did, and Teddy had already taken his Senate seat for Massachusetts – but the principle remains. Bobby talked about moving to England, becoming a professor, writing a book – but he was a Kennedy, and politics was always the only option.

The revolution was in the scale. For the first time Bobby became exposed to the issues of the everyday, race and poverty and neglect, in a far more intimate and personal way than he had as Attorney General. He was no longer responsible for an entire nation, just the state of New York, and his immersion in local and regional affairs opened his eyes and changed his perspective. His famous speech in South Africa is indicative of that – not grandstanding, not major forces of history, not dominant personalities leading the way.

“Each time a man stands up for an ideal, or acts to improve the lot of others, or strikes out against injustice, he sends forth a tiny ripple of hope, and crossing each other from a million different centers of energy and daring those ripples build a current which can sweep down the mightiest walls of oppression and resistance.”

The Bobby Kennedy in the centre of power could never have made that speech, never realised that the powerless could make a difference. It took his brother’s death and his own loss of identity and focus to realise that. His own revolution was only just beginning in 1968, and what it could have accomplished we will sadly never know.

← Review: The Barbary Plague: The Black Death in Victorian San Francisco – Marilyn Chase
“Without hope, without witness, without reward..” →