Review: The Stations of the Sun: A History of the Ritual Year in Britain – Ronald Hutton 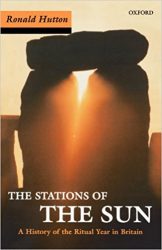 Even today, the idea that many folk traditions and festivals are the remnants of some pagan pre-Christian Celtic religion, transmogrified and surviving furtively in the countryside, has a peculiar potency. What few people realise is how recent a notion that is and how much it relies on a particular handful of archaeologists, folklorists and historians writing at the end of the nineteenth and beginning of the twentieth centuries, influenced by the growing ‘cult of the countryside’ that began in the wake of the Industrial Revolution and grew apace as more and more of the population abandoned said countryside for urban life.

Perhaps the most influential of these was Sir James Frazer in his massively important magnum opus The Golden Bough, in which he argued for the existence of the aforementioned pan-European Celtic nature religion, using as evidence many of the surviving folk customs of the British Isles. Frazer’s approach was to attempt to reconstruct this religion from these remnants, but of course this entire approach rests on the fundamentally flawed basis that these customs and festivals were in fact of ancient origin, evolved through the years beyond recognition and now performed by a rural population utterly unaware of their original meaning or significance.

In this book, called a history of the ritual year in Britain, Ronald Hutton sets out to investigate these assumptions, managing along the way to fairly successfully disprove any form of ancient origin for the vast majority of seasonal British festivals and celebrations. He begins with the Twelve Days of Christmas, with New Year’s gifts, Mummers’ Dances, Hobby Horses and Lords of Misrule, and moves through the year, taking in Valentine’s Day, Shrovetide, Easter, Beltane, May Day, Midsummer and onwards through harvest festivals and Halloween. What becomes obvious is how many of these seasonal celebrations actually had their origins in Christian church services and blessings, many aspects of which were deemed heretical in the wake of the Reformation and were moved outside of the church and mutated into customs centred on the community and the family instead of the traditional parish.

What does become obvious by the close is, as Hutton argues, “that the rhythms of the British year are timeless, and impose certain perpetual patterns upon calendar customs: a yearning for light, greenery, warmth, and joy in midwinter, a propensity to celebrate the spring with symbols of rebirth, an impulse to make merry in the sunlight and open air during the summer, and a tendency for thoughts to turn towards death and the uncanny at the onset of winter.” But that does not mean that the expressions of those impulses are timeless or that they have come down to us through the years in some unbroken link to a mythical pre-Christian unified pagan religion.

2 comments for “Review: The Stations of the Sun: A History of the Ritual Year in Britain – Ronald Hutton”