Review: The Taste Of War: World War Two And The Battle For Food – Lizzie Collingham 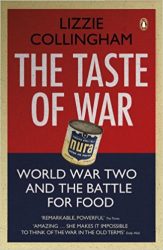 This was a fascinating read, far more so than I’d expected. I’d picked this book up hoping for some kind of history of rationing and the British wartime food drive – ‘Dig for Victory’ and all that. What I actually got was an incredibly well-researched, comprehensive and thoroughly interesting history of the role food played in the Second World War – its role in the origins of the war, the course of it, the ending of it, and finally the aftermath. During the course of the war more people died from starvation than in active military combat – many many more. The actual numbers are staggering – 3 million in Bengal, over 1 million in Leningrad, 300,000 in Greece, 20,000 in Holland, 2 million in Vietnam. It is estimated that over 20 million people died of starvation during the course of the war.

The author argues that it was partly the worldwide pressure for more food during the agricultural decline of the 1930s that led both Germany and Japan to begin eyeing up their neighbours as a source of food. Both countries chose to ‘export’ their hunger problems, occupying other countries and appropriating their food supplies in order to feed their own populations. Numerous Nazi officials are quoted as saying that every country in Europe could starve before Germans would feel want. Germany saw the Ukraine and the Soviet Union as an unlimited source of agricultural land and food, in much the same as Japan saw China.

However, she also explores how the British exported their own hunger problems, most notably to India and the African conflicts, increasing the pressure on these countries to produce more and more food to feed the Allied armies and the British civilian population. Despite all the talk we’ve heard over the years of rationing and deprivation during wartime, no-one in Britain was ever in any danger of starving.

And of course the overarching theme of this book is America. America was the only country to emerge from the war with its economy booming, its people better-paid and better-fed than ever before. The American Lend-Lease program arguably kept the war alive, because it is entirely possible that had the British population been exposed to the kind of deprivation that citizens in occupied Europe were experiencing morale would have collapsed. But even then the American government was prepared to leave its Allies desperately scrabbling for food before it would cut its own troops or citizens’ rations, all of which were far more generous than was necessary.

Collingham concludes by arguing that it was the years of want and deprivation and the vision of healthy, well-fed GIs enjoying the fruits of American produce – Coca-Cola and chocolate – that have led to the over processed, over-packaged food we consume today that has led to so many health issues. And we may find ourselves coming full-circle at some point and having to return our diets to the old staples of bread and potatoes, as the world’s food supply comes once again increasingly under pressure.