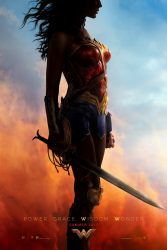 Wonder Woman, is, simply put, wonderful. I loved it. I loved it to the point where I want to dress up as Wonder Woman and run around pretending to fight evil, and I’m 34 years old. I can’t imagine what it must be like to be a little girl and see a woman like Diana on the big screen – finally! – strong and brave and fearless and full of heart and compassion. I wish I’d had this movie when I was a little girl.

Because Diana doesn’t need a man to protect her, she doesn’t allow men to tell her what to do or where to go, she doesn’t even understand why they try. Steve is the first man she’s ever met. She’s the hero, she’s the rescuer, she’s the commanding visible presence that inspires and leads and saves the day – and she’s a woman, praise be, she’s a woman. I laughed fit to bust in one scene where Steve tries to play the hero and shield Diana from attackers – she soon puts that right, and he’s all, ‘Yep, okay, she’s got this.’ She sure does. 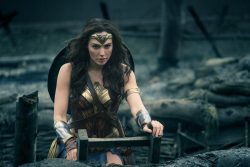 I couldn’t take my eyes off her watching this film, and in one of the scenes where she leads the charge across No Man’s Land alone, drawing attention and fire, I was so damn proud of her I cried. And I can’t explain how someone like me could be proud of a hero and a goddess, and a fictional one no less – but it’s because she’s a woman, and we never ever get to see women like this on the big screen, in their own movie, front and centre. Not part of an ensemble, not a brief moment to shine and then tucked in behind the hero, not a love interest. It’s her movie.

The scene where the women of Themyscira take on the German invaders of their island is quite simply the best action scene in the whole movie – in a movie with a fair few action scenes, probably too many if you ask me, particularly towards the end. Quite apart from the amazing visual of warrior women on horseback wielding sword and shield taking on modern German soldiers with guns, it was women kicking ass. Unapologetically kicking ass. 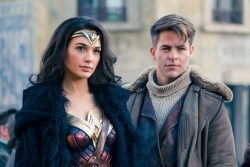 It’s not a perfect movie, don’t get me wrong – I’m not so utterly in love with Diana and Gal Gadot that I can’t see flaws in it (aside to audience, I am so in love I don’t care, though). The final showdown is a tad too long and relies too heavily on explosions and special effects, the trope of ‘slo mo Diana in action’ is overused, Lucy David’s character is sweet and funny but largely pointless, and the interim scenes in London between Themyscira and the Western Front lag. And, of course, even though it’s Diana’s movie Steve still has to have his moment to be a hero, he isn’t entirely relegated to love interest like a female equivalent would be. But it’s Chris Pine, who I love and adore, so I’m okay with that. Plus we get Chris Pine stark bollock naked too. How often do we get gratuitous naked or scantily clad women in the movies, for no reason other than to give us a bit of flesh? Well, I’m not complaining now. Equal opportunities ogling, thank you very much. 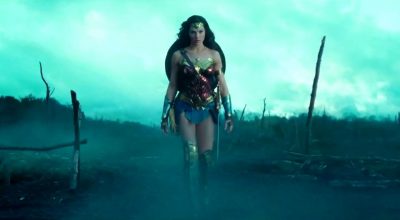