Review: The Fact of a Body: A Murder and a Memoir – Alexandria Marzano-Lesnevich 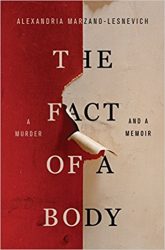 There is a term in tort law known as ‘proximate cause’, which effectively means an event closely enough related to an outcome resulting in an injury that it can be deemed the cause of said injury. Not necessarily directly, or even immediately obviously, but in law a narrative must start somewhere and end somewhere, and both of those somewheres must be identified and pinned down. A story must have a beginning and an end.

The concept does not exist in criminal law, as Alexandria Marzano-Lesnevich so beautifully and movingly demonstrates in this book, so impossible to pin down and describe. In criminal law, the outcome, the injury is all that matters. The murder, in this case. A little boy was murdered. A man named Ricky Langley did it. Why the man did it is important, but not as important as establishing that he did, beyond a reasonable doubt. What made him do it, where his story starts, what made him who he was, what made what he was, the proximate cause of the murder he committed – in a criminal narrative, that is not important.

But in life it is. We want to understand why. Not just the who and the how, but the why. What makes a man kill? What makes a paedophile? Where does it start? For the author, the why becomes even more important and even more personal because of her own history of sexual abuse. What makes a paedophile? Did it start somewhere in their own childhoods? Did someone hurt them? Does it start before they’re even born, in the history of their parents? How far back do you go, to understand what makes a person, what lies behind their actions and impules? It’s important, Alexandria Marzano-Lesnevich states at one point, the proximate cause of things, because “it’s where you want to start the causal chain. Once you decide that, you have decided the whole meaning of the story.” Where does it start?

This concept, the proximate cause of things, links the murder of little Jeremy Guillory and the author’s own childhood sexual abuse – her history colours her view of Jeremy and Ricky and it is in exploring that that she comes to term with her own past, her own experience with the harm of paedophilia. It’s a book about a crime, yes; it’s a true crime narrative – but it’s more than that, much more. It’s a personal memoir that becomes so interwoven with the crime that it’s impossible to separate, the way our lives and our emotions do intertwine, the way we only ever experience the world around us through the prism of our own lives. And it makes for a moving, heartbreaking, horrifying and utterly unputdownable read. I felt at times reading this that I wasn’t breathing, that too hard a breath would dispel the delicate structure of this book. And that something so beautiful can come from such an ugly beginning, wherever that may be, is a triumph.

2 comments for “Review: The Fact of a Body: A Murder and a Memoir – Alexandria Marzano-Lesnevich”