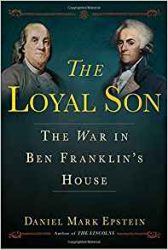 Although you don’t often hear it amidst all the enduring myths surrounding the American Revolution, more than anything else it was a civil war. The ‘rebellion against tyranny’ was far from universal, and historians estimate as many as one third of the population of the colonies remained loyal to the Crown. It was a war of colony against mother country, brother against brother, friend against friend, and sons against fathers.

And nowhere was this more true than in the home of the most famous American, both at home and abroad, of his day: Benjamin Franklin. Franklin’s deeds on behalf of the fledgling United States are too well known to go into detail here, but perhaps few know the story of Franklin’s only son, William, governor of New Jersey and loyal to the Crown to his death. William Franklin lost everything as a result of his loyalty to his King – his family ties, his wife, his home and property, his position. He was imprisoned in squalor and isolation for over a year, and his father lifted not a finger to help him, even keeping his grandson, William’s own son, from his father. William had chosen his path, and Benjamin Franklin was careful for his own position: a turncoat son was not looked upon fondly in the violent and treacherous days of the revolution.

But whilst Benjamin Franklin’s deeds and exploits before, during and after the Revolution might be legend, he did not come across as an especially appealing character in this book. A genius, perhaps; a polymath, certainly; charming, charismatic and a tab hand at diplomacy, for sure. But he also came across as self-important, pompous, selfish and petty. His neglect of his wife certainly doesn’t cover him in glory, and his persistent accounting of debts his son owed him, even into death, come across as spiteful. Reading this book I couldn’t help but feel that the most important thing in Benjamin Franklin’s life was Benjamin Franklin. And yet it is clear William adored his father, yearned for his love and approval, and never gave up hoping for the reconciliation that would restore them to the closeness of his youth.

I’ve read a number of Daniel Mark Epstein’s books recently, most notably his book on the Lincolns’ marriage, and I’ve yet to be disappointed. He has a particular knack for sympathetic portrayals of less than sympathetic characters, never judging or vilifying, yet somehow softening their flaws whilst still avoiding sycophancy or concealment. He made me feel for Mary Lincoln in his book about the Lincolns, and he made me care far more for William’s fate than one might have expected. Indeed, I came away from this book with a far better opinion of William Franklin than I did of Benjamin. Perhaps that’s partly a result of my being British – I’m not going to think badly of a man fighting against the Revolution and for the Crown, whereas an American reader with a different historical and cultural background might.

← Doughnuts and brownies and cupcakes, oh my!
Review: The Barbary Plague: The Black Death in Victorian San Francisco – Marilyn Chase →