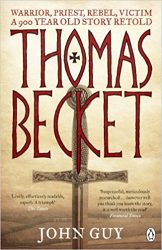 The story of Thomas Becket, St Thomas of Canterbury fame, is one of the formative myths of the English nation – and I use the term ‘myth’ deliberately, because whilst most people (hopefully) know something of the story of Thomas Becket and his martyrdom, I suspect the history behind the story is much less well-known. And yet it is hard to overstate the importance of Thomas Becket in English history – not just in his struggles against the over-mighty Henry II but in the place his cult and shrine at Canterbury came to occupy in the minds of his countrymen in the centuries after his murder. In many ways St Thomas became the personal saint of the English royal family, displacing the position St Edward the Confessor had held in the years previously.

One of the most interesting aspects of this book are the parallels between Henry II and Henry VIII, the latter obviously so much better known – both dominant, bullying figures, intent on establishing entire control of their domain, resenting the influence of the papacy and the church in what they deemed purely secular affairs; both looking to create a regional church, ring-fenced by the coast, with the king as ultimate arbiter of all within the realm; both resisted by senior clergymen who ultimately paid for their resistance with their lives. Of course, one of the key differences between Becket and John Fisher or Thomas More is the latter really did die for their principles and beliefs, whereas it is hard to escape the conclusion that Becket’s resistance to Henry II was more personal and worldly than spiritual.

This biography by John Guy brings the myth and the man to life, in all too real and vivid colour. It is marketed as a revisionist biography, rather than regular ‘history’, and the verve with which it is told is testament to that. There’s a fair amount of artistic licence here, and a bit too much imaginative reconstruction for my tastes. This is far more akin to a modern biography than one would expect for a figure who died more than 800 years ago – and for someone like me used to medieval history, the lack of footnotes and references was jarring and concerning. There’s little evidence of historical impartiality here, and that coupled with the aforementioned lack of references, anachronistic turns of phrase and historical supposition, leads me to view this book with more of a cautious eye than I would expect from an historian as respectable as John Guy. One thing is certainly for sure, reading this biography – John Guy is no fan of Henry II!

So on the one hand this is an excellent, readable and thoroughly enjoyable introduction to the life of Thomas Becket, but solid academic history it is not. If Guy and his publishers wished to bring Becket to life for a modern audience, then they have done a fine job – but I can’t help but regret what Guy’s authorial skill and academic credentials could have resulted in with just a bit more rigour and impartiality.

← Queen of the Conqueror: The Life of Matilda, Wife of William I – Tracy Borman
All the heartseyes… →