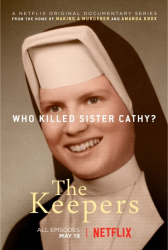 I spent most of the weekend utterly glued to the TV screen watching Netflix’s latest documentary series, The Keepers, which dropped on Friday night. It’s gruelling, gripping viewing, and it’s haunting me still, hours after I finished the last episode. I think it’ll haunt me for a while.

It’s about the unsolved murder of a young nun, Sister Cathy Cesnik, in November 1969, a murder which uncovers a horrifying scandal of sexual abuse at a Catholic girls’ high school, by the school chaplain, Father Joseph Maskell, and the likely cover-up of both the murder and the abuse by those entrusted to protect those girls – the Church and the authorities.

If evil exists, then Father Maskell was evil, no doubt about it. What he did to those girls, the trust he betrayed, not just to them but to his Church and his God, the lies and the manipulation and the fear, girl after girl, year after year… It’s just indescribable. Watching this documentary you just find yourself asking, How? and Why? over and over again, with no clear answer.

This isn’t a whodunnit; in many ways it’s not about solving the case, it’s not about the mysteries. It’s about the victims, about how one survives abuse, how the lifelong trauma impacts on every subsequent moment, every relationship. It’s about how women’s voices are dismissed, women’s testimonies deemed unreliable, inadmissible. More than anything else, this series gives these women their voices back.

Watching this my heart just broke for those young girls and the damaged women they grew up to be – broke and all the same time swelled with pride at the strength they grew into and the determination that led some of them to fight back, to demand justice for themselves and Sister Cathy.

← Review: ‘So High a Blood: The Story of Margaret Douglas, the Tudor That Time Forgot’ – Morgan Ring
Review: The Fact of a Body: A Murder and a Memoir – Alexandria Marzano-Lesnevich →