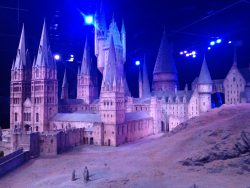 Because I am 34 going on 13, I went to the Harry Potter Studio Tour at Leavesden Studios for the second time this weekend. If you’ve never been, I can’t recommend it enough. It’s the closest you’ll get to ever stepping inside Hogwarts. And it really is for everybody – kids, adults, kids masquerading as adults like me. I’d go again in a heartbeat. Plus there’s always something new or something you didn’t notice last time.

Like the portraits! I’ve never paid much attention at all the various portraits that were used in the film, but this time around I noticed how many weren’t just ‘generic witches and wizards’; they’d actually reused historical portraits too. Tweaked and edited at times, but definitely recognisable. I noticed Anne Boleyn, Lord Byron, Elizabeth I, Henry VII, Mary I, Richard Burton…

Now whether it’s a sneaky way of suggesting these historical figures might actually have been witches and wizards, or it’s just an in-joke that most people won’t notice – but I loved it! I was staring at the Richard Burton one for a good five minutes going, ‘I know that face, I know that face’ and then I Googled it and yep, Richard Burton the explorer. And there were a couple more I know I recognised but couldn’t place. 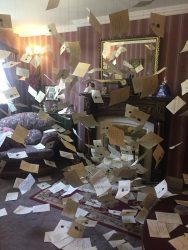 When you see the sets and the props and the costumes up close like this, it makes you realise just where the money goes on films like this. The level of detail and the quality is amazing, and the sheer volume of it, in endless array, it’s amazing. Even the fine work and detail on props that you would barely even see in the film, it’s all there. 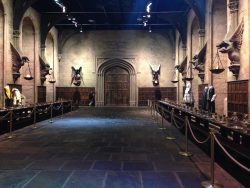 And how good the set designers and prop-makers are too – when you stand in the Great Hall, with all the tables and the scones and the fireplace, you’d swear it was stone, but then you come out and round the back and it’s all just plaster and MDF, and you knock on it and it’s hollow. 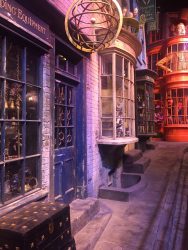 favourite part is Diagon Alley, I think. I just love the way it’s laid out and how you feel you could just step inside those shops. Obviously in Orlando you can, but somehow it’s not the same. Mainly because then every shop is totally rammed with people and you can’t pause and look at the detail without getting an elbow in your stomach or someone else’s sweat dripping down your back! I love peering in the windows of these shops, like Flourish & Blotts or Ollivanders or Florean Fortescue’s Ice Cream Parlour.

There was a small group of cosplayers going round much the same time we were – probably early twenties, I think. A Harry Potter, a Bellatrix Lestrange, a Snape and a girl who I think was meant to be Luna but looked like a basic blonde Ravenclaw. I thought they looked great, especially when you just caught a glimpse of Snape disappearing round a corner or from a distance, especially in Diagon Alley!

The one area that I was a teeny bit disappointed with was the catering. 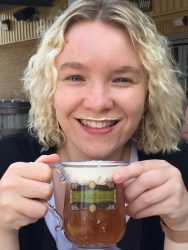 There is a cafe halfway round where you can get sandwiches and hot food and butterbeer! Yay butterbeer. And they were surprisingly nice sandwiches. But it would have been beyond cool if they’d themed the food, so it wasn’t just generic burgers, chips, mac and cheese. Harry Potter themed food, come on, who wouldn’t love that? Pumpkin juice and pumpkin pasties and Great Hall feasts? I think they missed a trick there.

And then, as always, you finish up in the gift shop and try and resist the urge to spend a fortune. The prices are horrendous, but there are some decent bargains to be had. I was hoping they’d have cuddly Nifflers for sale, but no luck. Plenty of cuddly Hedwigs and Crookshanks and Scabbers and Buckbeaks, but no Nifflers.

← Review: The Fact of a Body: A Murder and a Memoir – Alexandria Marzano-Lesnevich
At the going down of the sun… →

1 comment for ““Yer a wizard, Harry!” Adventures at Hogwarts…”